In the past couple of weeks, Dogecoin seems to be the most attention-grabbing crypto after the emojis Shiba Inus and Elon Musk Tweets. With a viral dog meme brand picture, it is spreading with the speed of light. Today, it holds a market capitalization of approx 22.78 billion U.S. dollars in April 2021. 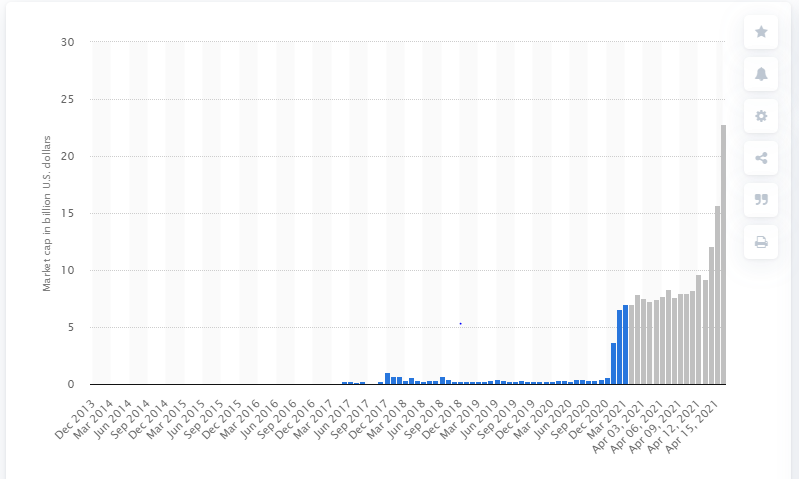 After seeing such a hike in the market cap, it is fascinating to watch where it will go in the future. For those who yet don’t know- what is Dogecoin? And when did it get started?

You are not far away; here, we will discuss everything about it so that it becomes easy for you to understand whether it’s the right time to invest in it or it’s just hype.

Like Bitcoin, Dogecoin is also an open-source, peer-to-peer digital currency created by two software engineers named Jackson Palmer and Billy Markus in late 2013. They thought of developing a fun currency by keeping a meme of the Japanese breed Shiba Inu dog in the logo.

Though it got started as a joke by two software engineers, surprisingly, it attempted a jump of 2000% in value in 2021 as per CNN. According to the BBC, Dogecoin has risen over 800% till now. And also, with no upper limits, there are over 129 billion doge coins in circulation as of May 9, 2021.

Apart from that, DOGE is not tied to a specific service or assets. So in real life, we can’t use this cryptocurrency to buy something that we usually can do with Bitcoin.

When Did Dogecoin Start?

After the success of Bitcoin, many different crypto coins start coming into the market like  Ripple, Litecoin (LTC), Neo (NEO), Stellar (XLM), Ether (ETH), etc. each of them claims to have a different feature or somewhat superior feature than Bitcoin. However, whichever coin gets launched after the Bitcoin is called Altcoin.

Similarly, cryptocurrency Dogecoin is an altcoin, but the creator started it as a fun and friendly Internet currency. They launched it in December 2013 owing Japanese dog breed Shiba Inu picture and became the talk of the town.  This way, it was considered for fun use in the middle of the serious market. 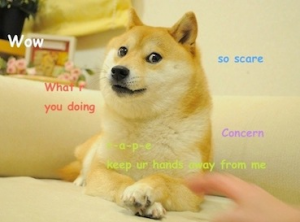 Therefore, the intent was not to compete with Bitcoin rather just fun coins. However, lately, it has become the gateway for many people dipping their toes into the world of cryptocurrencies for the first time, all thanks to its low price and welcoming community.

Its usage gets started with one thing called tipping and steadily becomes one of the favorite microtransaction methods on Reddit. Whenever anyone likes any article on Reddit, they give DOGE as a tip of appreciation. Hence, it was the topmost tipping crypto coin, and that’s all took place because of Dogetipbot. 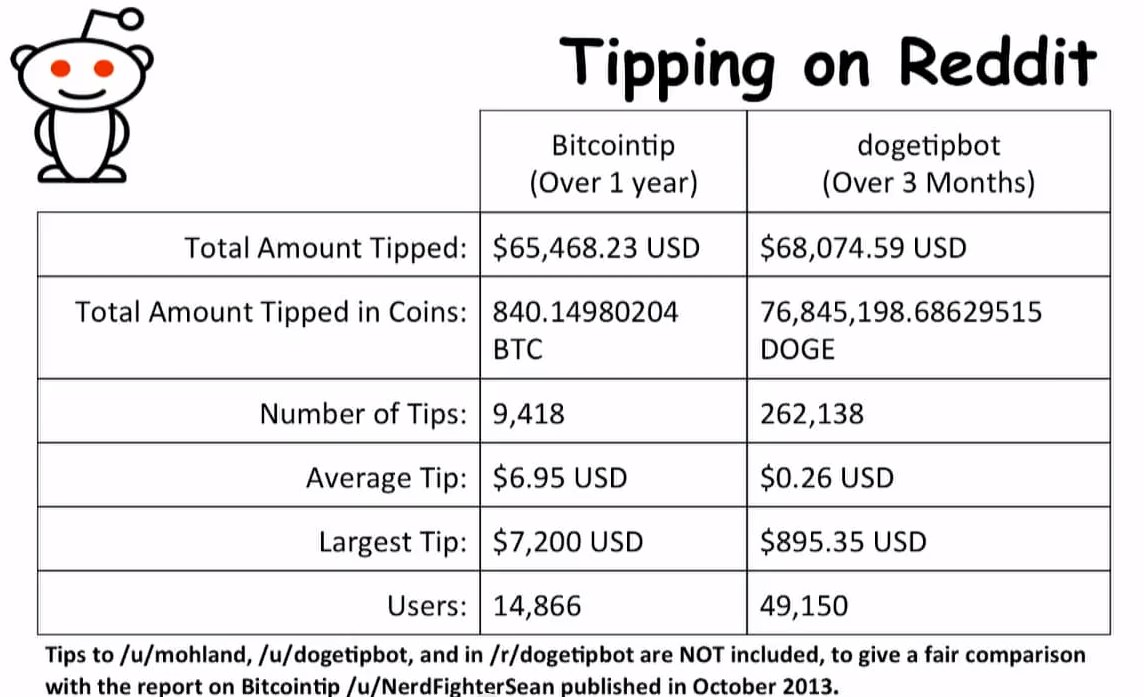 Since the intent of the Dogecoin cryptocurrency was never money-making but, it was used for better causes.  For example, the Dogecoin community raised more than $6,500 for Indian athletes at the 2014 Winter Olympics.

Unlike Bitcoin, if you see it, there is no limit to the number of Dogecoin that can be created. Besides all this extraordinary origin story, we see its popularity explode in 2021. It has now become the fifth-largest cryptocurrency by market cap.

It is no longer a joke; Tesla CEO Elon Musk started calling it his favorite crypto. He kept on tweeting about DOGE and mentioned it as a “people’s crypto,” and excited the entire scenario by saying- Dogecoin will soon reach the moon. 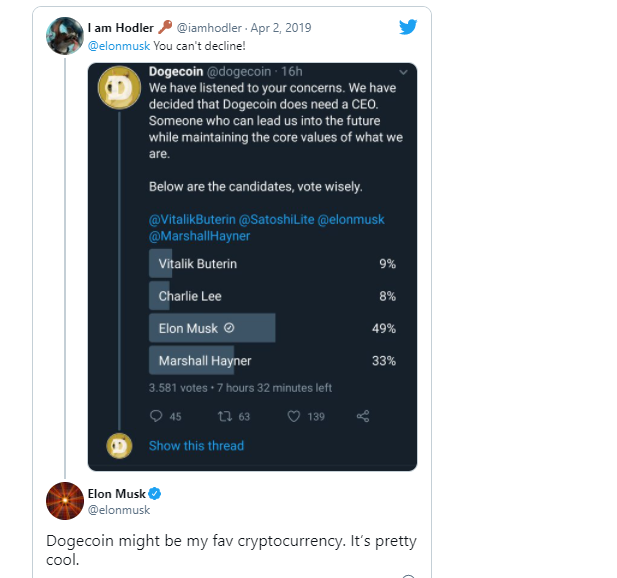 How Does Dogecoin Gain Value?

In its seven years of journey, Dogecoin got a hike in terms of popularity and value in December 2020. Plus, it has exceeded 10 cents in value for the first time in history, marking a sudden hike from its previous value of 0.0023 cents (2020).

When people on social media post make memes about Dogecoin, we often see the price goes up. This is what happens after Elon Musk usually posts about Dogecoin. Besides this, we also noticed; over the last year, many people on Tik Tok were making videos about dogecoin and how it could make you rich?

This also led to the price skyrocketing. In the article from Forbes, the headline says, let’s all get rich.

How To Buy Dogecoin?

The best and quickest way to buy Dogecoin is via a cryptocurrency exchange. There are many crypto trading platforms available worldwide that allow you to buy it, such as :

Buying Dogecoin can be broken down into three simple steps:

Is it smart to invest in Dogecoin right now?

Since Dogecoin is continuously pumping and dumping, the question arises around it- is dogecoin a good investment?

Like any other cryptocurrency, buying sort of involves risk, and that is the same with  Dogecoin. But with this particular coin, the seriousness of risk is a bit high as it all started as a joke.

Doge has some security risks as per White’s word as the code level is not secured as other cryptos like  Bitcoin or Ethereum. He also mentioned that there is no robust mining level in this coin. This way, he somehow tries to warn people about the risk they may face in the future.

However, the start of 2021 has been well rewarded for this coin. There are currently 128 billion DOGE in circulation, and people assume it may hit  20 cents to 50 cents or even a dollar within the next year or two years if it gets this continued momentum.

But it hard to guess what could happen with any crypto in the future, especially with the crypto world. Since there is a continuous flow of new coins onto the market, it places endless downward pressure on its value.

In short, putting your hard-earned money in crypto like that which started their journey as a joke is quite risky. So, think before you buy.

Also Read: Is the Fintech Industry A Threat to Global Banking: Myth or Reality?

That’s how it all started as a joke and now becomes today’s controversial topic- will it reach the moon or get dumped as a Zero. Mr. Markus and Jackson Palmer were two developers who created Dogecoin seven years back.

According to the researchers, it may take time to reach $1, but anything could happen in between. So it is nowhere a joke; in fact, considered one of the topmost topics of the year 2021.

Q1: Why You Should Buy Bitcoin Over Dogecoin?

A1: Since the start of this year, 2021, Dogecoin has relatively outperformed Bitcoin. Dogecoin’s price went up and up and had reached more than 6,000% at the beginning of 2021, whereas the graph of  Bitcoin rose by 37%. That shows a huge jump in the DOGE community.

But the question still goes around-  should you buy it or not.

Apart from all these up and down in the market, it is always good to go with Bitcoin; here is three reason:

A2: Some cryptocurrency observers and Social media users expect the dogecoin price may reach $1 by the end of the year, but on the other hand, some forecasts indicate it will take many years to get to this level.

A3: There were two software developers behind the start of Doge Crypto-  Mr. Markus and Jackson Palmer created Dogecoin as a joke in late 2013. They created this payment system while making fun of the speculation in the crypto world.

Moreover, it holds the face of the Shiba Inu and includes it in its logo. This Shiba Inu is a dog from the popular “Doge” meme. In late 2013, it was introduced in the market and quickly made a larger space in the online community. Today, its market capitalization is -US$85,314,347,523 on May 5, 2021

SEM vs. SEO: Which Is The Wise Choice For Marketers?